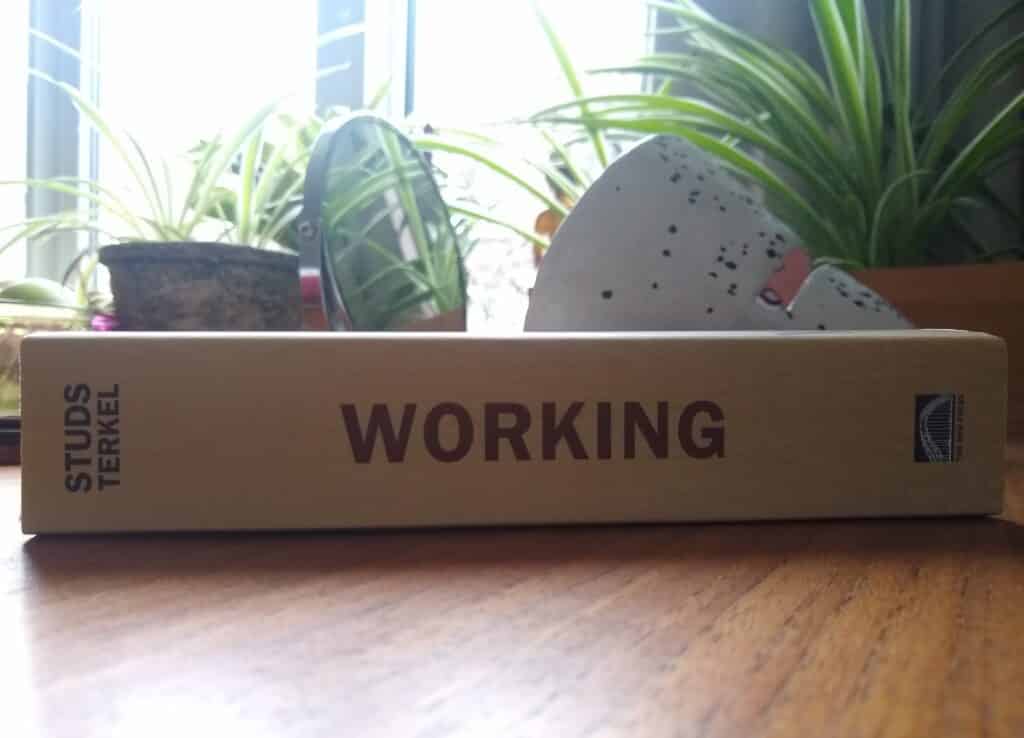 This post is about the first book in the Lis’ Book Club, which is limited to books that have personally impacted my life. All previous selections can be found on my Bookshelf. Enjoy!

Studs Terkel was one of the UK’s beloved radio broadcasters and oral historians of the seventies. One of the pieces that people still talk about is his book called Working. During the interviews, Americans talk about what they do all day and about how they feel about what they do. Working by Studs Terkel is an insightful look into the lives of ordinary people with strong and extraordinary voices.

Working features interviews with more than a hundred workers – both men and women – from all walks of life. These American voices all speak to Terkel, sharing their likes and frustrations, fears, problems, and moments of happiness on the job.

Working by Studs Terkel is definitely an unique and rich document. The book investigates the meaning of work for different kinds of people, under different kinds of circumstances. The stories alternate from specific everyday experiences to emotional truths and life questionings. The book excels in it’s simpleness, but is as deep as the meaning of life…

Therefore, it is not surprising to me that Working by Studs Terkel became a bestseller – and, a few years later, a Broadway musical. And after more than decades, it’s nice to see the book is still subject of conversation.

An insightful look into the lives of others

If you have ever wondered what being a mustachioed New York cop in the 70s was like, how it feels to labor as a Springsteen-esque steelworker, or a stonemason, this book might be something for you. It’s an insightful look into the ordinary lives of others.

Not only did Terkel interview flight hostesses, but also prostitutes, piano tuners, steelworkers, firemen, bookbinders, company presidents, autoworkers, the unemployed, janitors, gravediggers, community organizers, cops and many more. The list goes on and on, and the stories are fascinating, inspiring, and sometimes terribly sad. If you have ever wondered about other ways that people make a living, you can’t pass Working up.

Also, hearing all of those people speak reminded me that really everyone has a great story to tell. And as the recordings imply, people do want us to hear their story. Every person is on their own journey and where we are from, what we are doing, who we love and where we are going is what makes our story unique.

A shocking portal of the seventies

Beyond the individual human stories, this book is a sometimes shocking portal into what is by 2020 standards a grossly sexist and racist time. Working by Studs Terkel will transport you, not just into the working lives of others, but also into a different, and in many ways alien, era. This is the unvarnished sixties and seventies of the United States. Beyond the bell-bottoms and mustaches there is a great deal of ugliness.

A flight hostess details how if she got a blemish, or put on any weight she would be stood down from work. She also discusses being encouraged to smoke in her training and specific lessons on how best to let a man light one’s cigarette.

Furthermore, policemen discuss the racism they saw other cops displaying. They speak about their prejudices against and attacks on minorities and the poor, and sometimes against their own black colleagues. Other workers discuss the ways their jobs physically crushed them. The slow progress of workplace safety in this era was clearly too slow for many men and women whose backs gave out, whose health was broken on the wheel of work.

Some of this awfulness made me hopeful, considering how far we’ve come since then in workplace gender rights. In others, it saddened me – the foundations for present-day unresolved race issues are clearly visible, and precarious work is still as depressing and life-limiting for people in 2020 as it was decades ago.

The meaning of work

But the biggest thing that I took away from listening to the audio version is how we all have things in common when it comes to the meaning of work. I mean, the audiotapes illustrate that people aren’t necessarily wired to work because they have to. I sensed that Terkel found people who sought for structure. They all wanted to be occupied, were looking for community, pride and meaning… Terkel says about this:

“Work is about a search for daily meaning as well as daily bread, for recognition as well as cash, for astonishment rather than torpor; in short, for a sort of life rather than a Monday through Friday sort of dying.” – Studs Terkel

I like that statement and I think it’s an interesting observation. I believe that we are all looking for these kinds of things and if we are lucky enough, we find meaning in most of our waking hours. It makes sense to check-in regularly with ourselves, to find what drives us and gives us energy. In that way, we are more likely to find the right job and continue doing it happily and successfully.

I really can’t recommend this book enough. Terkel was able to show a light on extraordinairy people who normally lack visibility to the public mass. At the end of Working I had the idea I had gotten to know fifty or sixty people. They shared their dreams, their fears and their frustrations. I had the feeling I was close to them, if only for a couple of hours. In some ways I got to vividly live the lives of others.

See Working by Studs Terkel on Goodreads and purchase through the Book Depository or Amazon. For more books that I read, head over to my bookshelf.

Leave a book review yourself, or check out what others have said about this book.