From the short stories series: The Elephant Rope 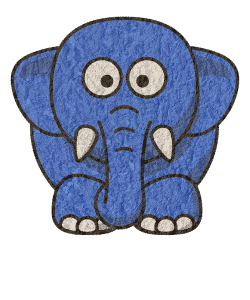 From the short stories series: The Elephant Rope

This is another motivational short story and this time it endorses the power of our believe system. Both what we think or believe is true, influence the kind of choices we make in life, as well as the way we think about ourselves. This upcoming short story is about some elephants who hold on to a certain believe system that is so powerful, that it controls their minds in a way that they suffer from it.

When a gentleman passed an elephant camp, he gazed upon the standing elephants.

He suddenly stopped, because there was something that surprised him.

These elephants weren’t being kept in cages or held by the use of chains. All that was holding them back from escaping the camp, was a small rope tied to their front leg.

It was obvious that the elephants could, at anytime, break away from their bonds, but for some reason they didn’t.

As the man gazed upon the elephants, he was completely confused as to why the elephants didn’t just use their strength to break the rope and escape the camp as it was easy to do.

Curious and wanting to know the answer, the gentleman stopped a trainer nearby.

He asked this trainer why the elephants were just standing there and never tried to escape.

“When they are very young and much smaller we use the same size rope to tie them and, at that age, it’s enough to hold them. As they grow up, they are conditioned to believe they cannot break away. They believe the rope can still hold them, so they never try to break free.”

The man was amazed. These animals could at any time break free from their bonds, but because they believed they couldn’t, they were stuck right where they were.

The gentleman concluded that the only reason that the elephants weren’t breaking free and escaping from the camp was their believe system. Over time they adopted the belief that it just wasn’t possible.

Author of the Elephant Rope: Unknown.

The story of the elephants is somehow metaphoric for life. I mean we all go through life hanging onto a belief that we cannot do something, simply because we failed at it once before. There is a name for that, the Elephant-chain syndrome. It appears in our lives when we are held back by self-imposed limitations or entrenched thinking patterns.

Humans are exactly like elephants except for one thing — we can choose ‘not to accept the false boundaries’ and limitations that have been created by the past.

It strikes me that people often make the assumption that they have to be good at first and that things come your way in an instant. But viewing mistakes as “gifts” or valuable lessons are more helpful. They support you to go into the right direction. In the blog This to me is the definition of success, I spoke about how making mistakes is part of learning and a big part of finding success.

The elephant story to me is about belief too. There are certain things that happen to us during our lives that are beyond our control. Sometimes life just holds our back. Many times – not always – it’s not life but us, who are our own biggest enemies. We tell ourselves stories that we can not have the things that we want in life because those things are not possible, or you are not good enough. And we start to believe that. But believing that you can become successful is an important step in actually achieving it.

The blind men and the elephant